I work in a very strange spot, where old industry meets new technology.  It’s at a crossroad that sounds more like a metaphor than a real spot, an unassuming corner that brings old school Chicago together with business for the new millennia.

You cannot even squeeze a tiny bicycle down Fulton Market street during the early morning to late afternoon.  The street is packed with tall men in long white coats, running to and fro, bringing stacks of brown boxes to idling trucks and muscular forklifts.  The street is littered with men and machines, anxiously filling orders and ready to scurry at a moments notice.  It is a public street, but there is no room for cars, pedestrians, let alone bikes.  Enter at your own risk, you will be the frog leaping, the chicken wondering if it can cross the road.

The meat-packing district of Chicago is an industry staple, and this intersection is where it was born.  This trade formed the identity of this Midwestern metropolis, molded it into the meat-centric, gastro-destination of the nation.

At the end of this meat-packing row, at the corner by a stop sign, sits a small restaurant, serving up Brazilian influenced and locally inspired food.  It’s quaint, it’s unpretentious, it strives to make good and simple food day in and day out.  It is innocently unaware of the power struggle raging on outside, blissfully happy in the crossfire between the old world and the new regime.

After the stop sign, past the meat empire, sits the new google building.  This will be the hub for the technological overlord that will be the new master of Chicagoans, representing the new direction in industry.  These modern offices will shape Chicago in many ways that are just as meaningful as the meat-packing legacy, but oh so completely different. This is not the physical labor of men in uniforms, trucks almost running you over in their physical hurry.  Here, the work is conceptual, all the running around will be done with fingertips instead of fork lifts.

The restaurant is the twilight of these two worlds, and I am caught in the transition. 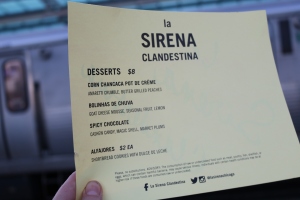