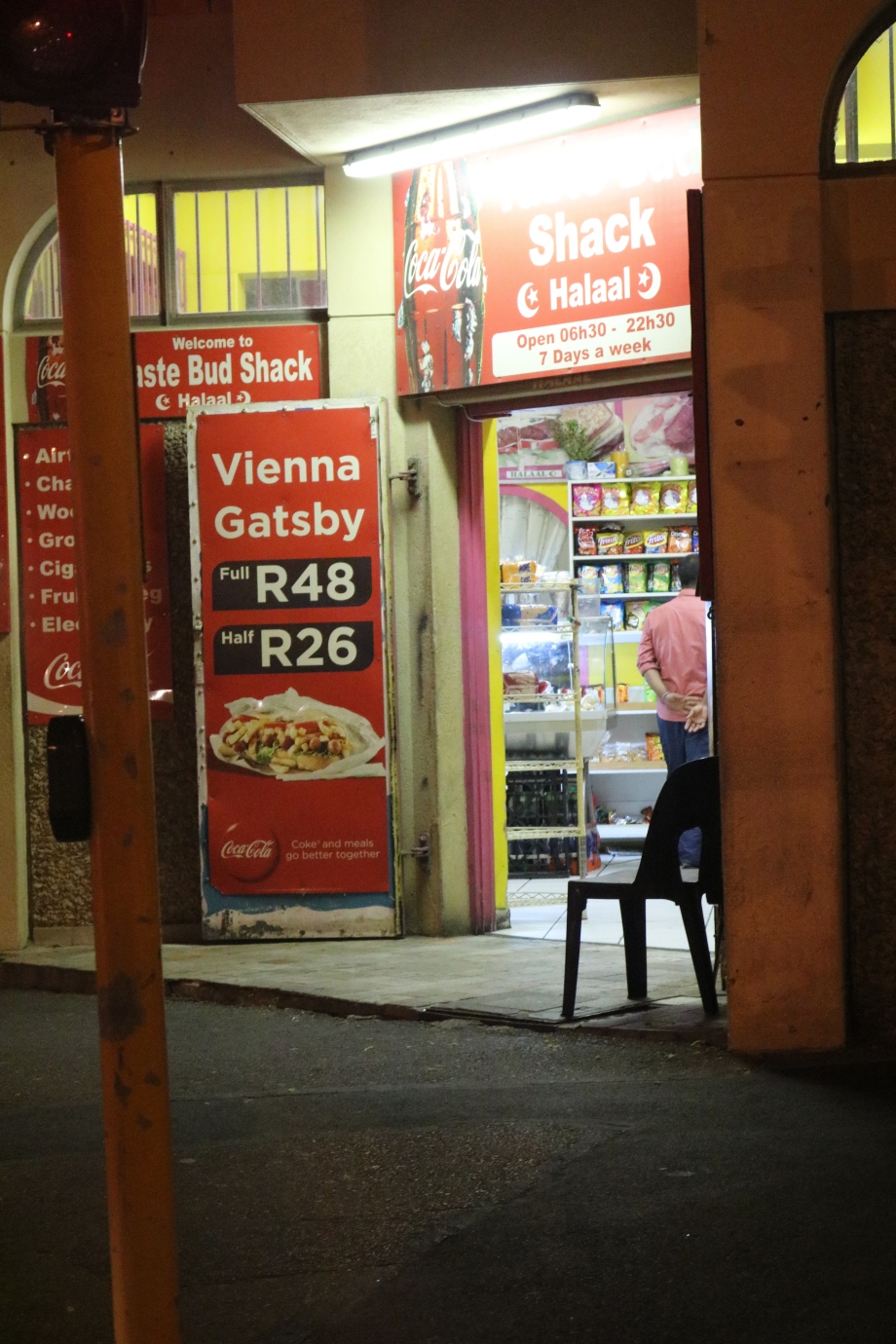 Halal fast food at your corner store.  Turkish influenced South African convenient cuisine, with an added American touch for comfort.   Vienna referring to a sausage, a Gatsby being a giant submarine sandwich, legend to be as long as your arm.  This is a sandwich made for sharing, the longer the better, the more fillings the more respected of a sandwich.  A Gatsby is a Cape Town staple, and yes it is named after the book, but nobody seems to know why exactly.   Good thing they sell it by the half, given you don’t have all your family members present.  Also Turkish style, the French fries are served on the sandwich.  Who needs sides?

This is an example of how it should be, when you go to the supermarket to pick up provisions, and there is a wall of one ingredient with countless varieties and brands, in this specific case butter, that greets you.  No margarine in sight, just block after block of deliciously diverse pounds of real butter.  Many quality options to choose from, nothing binding you to that one bland brand,  the same one probably used in prison, that watery pale block, nothing likes it’s golden counterpart.

This singular example of butter for sale in a chain grocery store in South Africa demonstrates the lacking variety in American grocery stores.  There are many simple treasures that we deprive ourselves of because of uniformity and mono-corporations.

Kissing the clouds not with the sky scrapers ambition, but with the bust of the mountains pride.  This city does not need a white façade to provide the enchantment of magic, it does not need a magician to orchestrate the cohesion of nature in this urban environment.

Cape Town is the yearning to kiss the cloud line, trying to match the ambition of the sky scrapers modernity.  Yet, still, this 400 years of industrial motivation cannot compete with the dominion of the natural stature.

The collective magic gathers around the peaks like a forming storm.  I just hope the storm clouds do not continue to darken, I hope that it doesn’t form a tremendous downpour that washes away all potential of this blooming new culture.

I got to say, I knew it was diverse here- I knew there were a good amount of European descendants, and a good amount of Indians, but I am shocked at the diversity here.  Nearly everything is stemmed from the Dutch language, and it is abound everywhere.  I cannot even pretend to say the simplest of words.  No, I cannot say good morning, I can hardly say thanks.  Thankfully English is spoken by just about everyone, although the countrymen of South Africa are more accustomed to the British style accent.

Afrikaans is the widely used, second after English, a language derived from the Dutch language, and from what I gather, it is easier to speak then that heavily throaty and consonant ridden father language.  This language is spoken by the upper people, and the servant class the interacts with the people in power.  Although Zulu is spoken by the highest percentage of the population, all street signs, highway signs, and advertisements are in both Afrikaans and English.

Given that the majority of the population is black, and that 9 out of 11 official languages are of the indigenous people, I am surprised at the lack of black faces I have seen around- in the streets, in the stores, when I look around the community.  The culture has been overrun by the Dutch, German, and British, heavily influenced by Indian and Asian cultures.  I am not finding Africa inspired art or food, I am not hearing African centric music, I am not seeing different textiles and languages, I am not seeing the culture.  I am seeing a charming English countryside with Dutch street names and white faces everywhere I look.  I see shopping malls with Western fashion, I see grocery stores with imported fruit, I see restaurants that are inspired by the French cuisine.

It’s not like the situation back in the States, when the European settlers came and systematically destroyed all of the native people once they settled on the sandy shores.  80% of the population are descendants of the Sub- Sahara ancestry, but this is the invisible class.  These are the people who are pumping your gas, waiting your tables, picking up your trash, cooking your food, checking you out at the grocery store.  These are the people that are living in shack communities with tiny house that are so close to one another that the outside walls seem to be seamless, that are hidden behind tall walls as to not disrupt your Kodak view of the surrounding beautiful countryside with the ocean view.

Apartheid, a government regulated legislation that enforced segregation, that kept the white skin in power and the black skin in poverty, existed until 1990.  That is a mere 25 years of trying to balance out a system that has been unfair since 1662.  Up until 1990 the indigenous languages were not even considered official languages- only English and Afrikaans were recognized.

South Africa is considered to be a modern industrial economy, earning the 7th highest percentage of income in all of Africa.  The money is found almost completely in the hands that burn easily in the sun, while the people who inherit this land are left in poverty, under educated, without a fighting chance in hell to catch up.  This system of unbalance is not doing justice to anyone- it is robbing the country of the diverse cultures and flavors that make this beautiful country interesting, unique, colorful, inspiring, and world class. The identity of this place is in the hands of people who have imposed their own set of culture, it is time to focus on what the majority of the population have to contribute.

The rain waited until we got home after a day of adventure to start it’s slow cry.  It happily waited until the sun left the horizon begin it’s nighttime wail.

With the evening in place, with the daytime travels in the past, luck was on my side to not have a sad sky to experience the beauty in this environment.

Driving along the coast of the Indian Ocean, traversing the highway etching along Western Cape, each turn is full of beautiful surprises.  After each curve in the road, you don’t know what sight will be up next, weather it is a long stretch of sandy coast line with bejeweled water peacefully rolling to the shore, or a mountain valley lined with lush tropical plants hugging the road, or a stint of African bush hibernating the road, waiting for the next rain to bring out their color.  There might be baboons hunched in the middle of the black paved highway, not worried about the passing traffic, too lazy to move out of the way unless you stop and try to capture their smile on camera.  You might even be surprised to see lines of straight American Pines standing like soldiers along the pass, strangely fitting in amongst the tropical plants.

The coastline is a rollercoaster following the curves of the mountain, taking you high enough to kiss the clouds, low enough to seen the glimmer of the sun reflect off the mighty ocean.

Nestled into the hillside, between the changing green scenery, mostly along the sandy shore line, are small seaside towns, white houses with colorful roofs dot the rolling terrain.  Each one has a main street fitted with the same name, shops and restaurants welcoming the curious traveler with the charm of a small town.

Sometimes the bay holds you in, reassuring you of where you belong, sometimes the expanse of the ocean gives you pause about your place in this wide world.

Soaking in the hot African Sun,

The vibrant lush green of the valley trees,

Is juxtaposed to the vibrant red dirt along the roadside.

The cool air of the bay,

The fog clinging to the ocean like an infant to its mother.

But just up a steep road, cut like a diamond through the rolling hillside

Balancing the swaying mountains like a surfer atop a wave,

A desert is waiting.

Those steady peaks mimic the waves found in the ocean,

Once you cross them you find heat

They are just as rough, just as defined as the anger in the ocean.

Despite their intrinsic differences, the ocean and the desert

Seem to have a lot in common.