This dessert captures the essence of the restaurant, more so than anything else I have created.  The concept of the restaurant is built around a wood burning kitchen that is open for the diners to see.  The kitchen is basically a wall of flames dancing in the backdrop of a delicious meal.  I wanted to bring a piece of that excitement to each table, I wanted to bring a slice of the action to each diner, I wanted the fire to be an integral part of the meal.

I am pretty happy with the outcome of this dish.  It is chocolate based but not too heavy.  It is not overly sweet, it is gooey, an array of textures backed by a fruit component, and a hint of spice.

To be honest, I have been working on this dish for a while, documented here Table side Effigy and here Wait for It and again here Version 1.0

Still, this dish is not done yet.  It still has to evolve into something greater, into something better, into a new identity.  It is always hard to top a winner, and the challenge leaves a lot of room for disappointment.  Nevertheless, I only see room for potential.  The evolution continues.

Prototype week at work means taste testing and tweaking.  Its time for the early summer dessert menu to sprout its warm weather wears.  Spoiler alert: everything must contain a berry.  Its berry season and I must exploit this seasonal ingredient fully.  We are all very impatient to have fresh food again, and I anxious to use fruit!

One example of lessons studied this week: 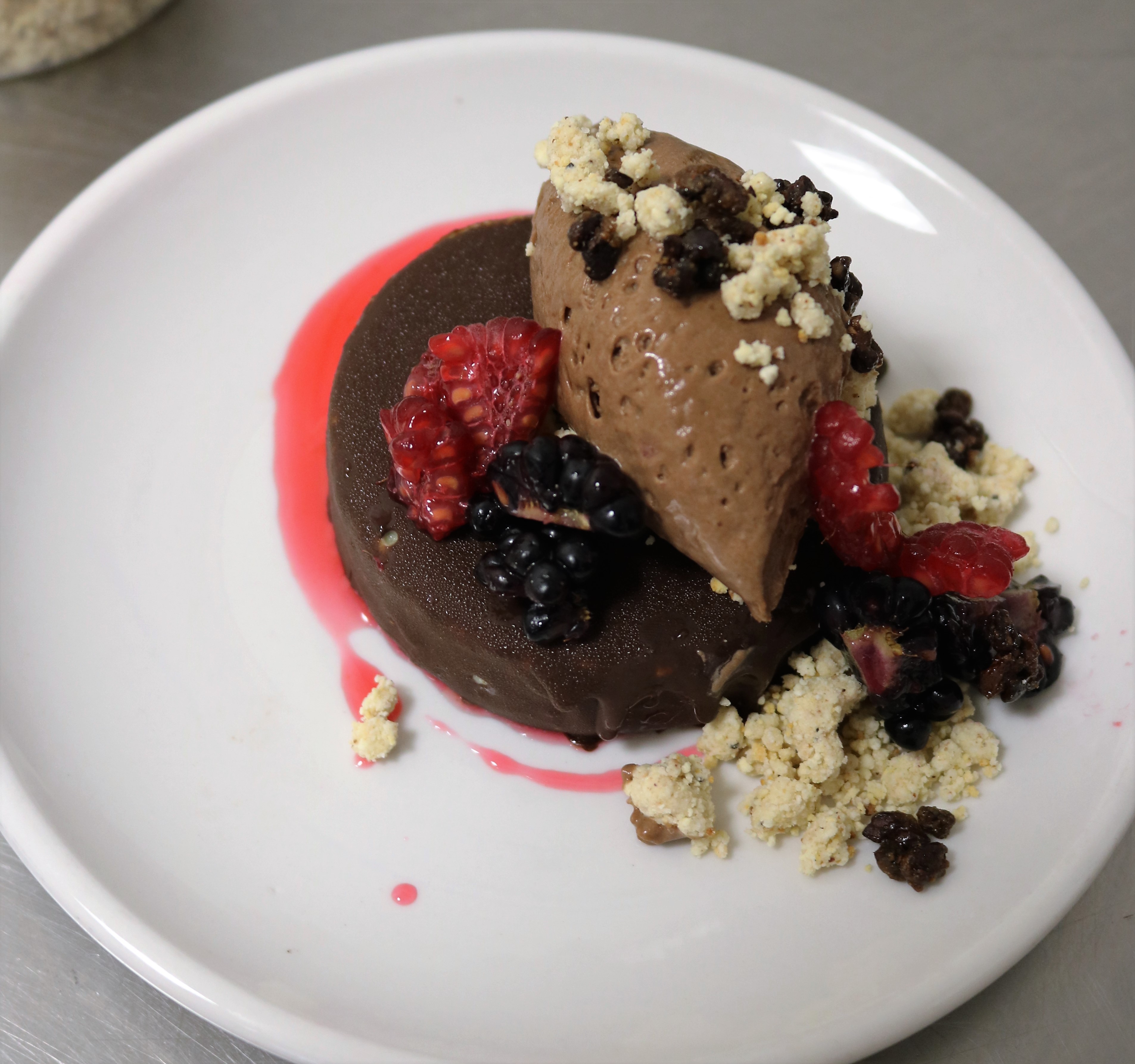 The quarto chocolate is almost ready to hit the plates, it just need to be refined a bit more.  What’s on the inside you ask?  What exactly is it? Well, you are just going to have to wait and see…

Catupiry Cheesecake
Bittersweet baked ganache, guava meringue, passion fruit, chocolate mousse
Catupiry is an iconic Brazilian cheese spread, the country’s fresh, unaged, simple cheese.  Here it is used as a base for the cheesecake, which is baked on top of ganache cake. This is a take on the American classic cheesecake dessert, and the regional black bottom dessert.  Traditionally this is made on top of a chocolate cake or brownie, but I wanted a richer tasting and gluten free version, so I replaced the cake with a baked ganache.
Catupiry is regionally served with guava paste, as a cheese course, or as a dessert.  I took this flavor pairing a step further to incorporate the Ecuadorian street food treat espumilla- essentially meringue made with guava puree.  This meringue is dehydrated to concentrate the flavor and to add a textural element to the dish.
The passion fruit is added to enhance that Latin aspect of the dish, as well as to add an acidic element.  Passion fruit has a distinct flavor, irreplaceable on the tongue.  I formed the purée into pearls, to mimic the raw form of passion fruit, all the flavor but without the seed.
Milk chocolate mousse is to complement all the flavors of the dish, while creating a chocolate forward concept.  The texture of the mousse adds to the overall mouth feel.
The dessert is plated with squares of the ganache cake coated in lime sugar, to highlight the lime in the cheesecake and the rich, decadent ganache cake used as a base.
Gluten free, nut free.

I want to burn away the passing of the year with tableside fire.  Whatever will be served for dessert, it will be covered in flames.  I want this elemental act to physically change the dessert, to morph it into something different.  The symbolism of the effigy cleanse is translated into a better version of what was originally presented.  The dish can still subsist without the flame, just as we can subsist the way we are now, but we want to reach for something better, an updated version of ourselves.  In order to promote a better inner version, outside forces must be considered.  You influence the world and soak up what the effects have to offer.

The beginnings of the concept: fire sugar cubes over magic shell with something that will melt on the inside. I am thinking about chocolate ganache or caramel.  Cake underneath to catch the oozing filling inside the magic shell.   This dish is also preview for El Che, the new restaurant, where I really want to focus on elemental impacts in dishes.  Since the restaurant will focus largely on fire, this will be the showpiece.

Light a booze soaked marshmallow? Sugar in the raw cube?

Cherries jubilee- cherries soaked in brandy, lite that shit up.  Could be underneath like a glowing fire.

Bananas foster, think about that and rum.  The caramelized bananas are soaking in rum.

I like the idea of having a strong caramel presence to highlight the effects of high heat.  There must be chocolate, because how can you celebrate without this magical ingredient?

Like vanilla, chocolate is also a labor intensive and highly refined product.  While vanilla is the most fickle during the initial growing process, the science behind chocolate shines in the post growing production.  Also similar to vanilla, chocolate will only grow 20 degrees north and south of the equator.

Long before chocolate became a common ingredient, the Aztecs believed the chocolate was food from the gods, given to the humans by a rouge deity who later got punished for introducing this amazing ingredient to the humans.  How this myth got started is very believable, considering how non appealing the fruit growing on the tree it.  It looks like a giant papaya, the natural fruit looks nothing like the final product.  It is hard to believe that humans figured out this process without divine intervention.

Chocolate was used as a form of currency in ancient times and as soon as the revolutionary war.

Chocolate is the final product made with cacao as a base. In raw form, cacao is very bitter and needs to be fermented to develop taste.  After the fermentation process, the beans are dried and roasted to further develop flavor.  The shell is then removed, separating out the cocoa nibs.  The Mayans used part of the outer shell as a fermented sugar to make liquor, a  tradition that has stopped with the demise of the civilization.  I bet this liquor was delicious.  Chocolate was served as a frothy bitter beverage, flavored with vanilla, used as medicine and valued for its aphrodisiac properties.

Although this process has largely not changed since ancient times, this is where the development of chocolate stopped until it was introduced to the Spanish, who took it one step further.  The Spanish added sugar, segueing chocolate into the confection that we know today.  In 1815 a Dutch chemist figured out a way to make chocolate less bitter by adding alkaline salt.  In 1850 a Quaker figured out how to add melted cocoa butter back into pressed chocolate, giving chocolate the solid form that we know today.  In 1875 a Swedish man added milk and mild powder to chocolate, forming the Nestle company and really changing the face of chocolate.

After the cacao is shelled, the cocoa nibs are further broken down to create cocoa mass and cocoa butter.  These are then recombined to create the ideal blend of mass and butter for mouth feel and structure.  After the chocolate is blended, it goes through a process called conching.  A container is filled with metal beads that act a grinders, making the chocolate and sugar granules so small that the tongue cannot detect any particles or grittiness.  This process can take up to 72 hours.

After this step, the chocolate must be tempered so that the fat crystals align in such a way to create a uniform structure.  This is done through a particular formula of time, temperature, and movement.  This process is one of the steps that makes working with chocolate so difficult.  Once chocolate is melted down, the crystal struck has collapsed.  It must be built back up again with this closely monitored system.  If not done properly, the chocolate with crumble instead of snap, very important for mouth feel and structural integrity of the final product

Although native to Mexico, West Africa grows 2/3 of chocolate, half of this coming from the ivory coast.  Given how laborious and long the process of making chocolate is, there is no surprise that slavery plantations sprung up to deal with growing demand of this amazing product.  Although slavery is now demeaned inhumane, we currently still have a problem with child slavery.  There are some chocolate products labeled fair trade, but surprisingly, child slavery still exists.  The demand for cheap and available product has created a situation that is beyond immoral and very upsetting.

Outside of a tasty confection, chocolate has long been used as a form of medicine.  It is high in antioxidants, reduces heart burn, and is an anti inflammatory.  Not only is chocolate delicious, its history complex, the uses for chocolate are seemly endless.

Vanilla and chocolate, both ubiquitous in desserts the world over, are native to Mexico.   These two ingredients are fascinating that they considered common given how labor intensive and rare they are.  They were originally cultivated by the Mayans, brought to outside world after the Columbus incident, developed into tasty treats by the French, made widely available by the industrial revolution.  The infamous Hernan Cortés is credited with bring both of these ingredients to the outside world.  The legacy of these flavors lives on, surpassing the fame of this conquistador, being a lasting link to a long dead civilization.

The history of these ingredients are long and bloody. It begins with the Aztecs equating the shelling of the cacao seeds with the scarifying of the human heart, and escalating into civilizations of slavery, plantations of forced labor, generations of exploration, and now with child labor violations.  Delicious.

We take these flavors for granted when in reality they have been consumed for thousands of years, have traveled the globe, and have extreme and laborious growing and production processes. Over the next two posts, Marigold is going to dive into detail about these amazing ingredients.

Come and find, indulge your intrigue.